Americans Are Independent But Are They Still Free? 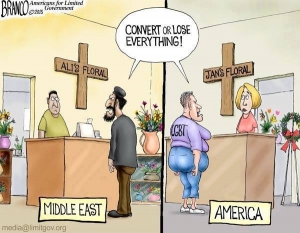 A majority of the honorable Supreme Court of the United States has recently judged that, whereas as recently as 2013 the court had asserted that marriage law is the province of the states, homosexuals have a constitutional right under the 14th amendment to civil marriage. Some of the dissenting opinions, most especially that of Justice Thomas, however, warn that religious liberty is now in serious jeopardy. That warning is not hyperbole. Brad Avakian, Oregon Labor Commissioner, has not only fined Aaron and Melissa Klein $135,000 for refusing to violate their conscience, for the free exercise of religion, but he has also issued a gag order demanding that the Kleins “cease and desist” from speaking and writing publicly about their refusal to participate in a homosexual wedding. The order says:

The Commissioner of the Bureau of Labor and Industries hereby orders [Aaron and Melissa Klein] to cease and desist from publishing, circulating, issuing or displaying, or causing to be published … any communication to the effect that any of the accommodations … will be refused, withheld from or denied to, or that any discrimination be made against, any person on account of their sexual orientation.