Why You Should Not Let Hollywood Catechize Your Children 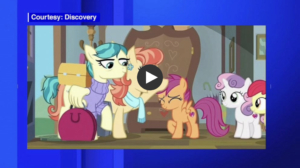 Had you told me that as a grown man with two adult children that I would, for any reason, write the words My Little Pony (MLP) in an article (or anywhere) I would have advised you to seek psychiatric care. Nevertheless, here we are. The company that produces the children’s television show, MLP has announced that they are adding a homosexual couple to that television show. In the same article we learn that the children’s show Arthur already has a gay character.

Of course television production companies are adding same-sex characters and couples to their shows. The new morality demands it but this is not mere virtue signaling. It is catechesis, instruction. Catechesis is a Greek word for instruction. It is the noun from which we get another noun, catechism. Confessional Protestant churches (e.g., Lutheran and Reformed) have used catechisms since the mid-16th century as a way to instruct the children of believers. A catechism is a little book (usually, except in the case of the 1994 Catechism of the Roman Catholic Church) of questions and answers (except in the case of the 1994 Romanist catechism). More broadly, however, catechesis is simply instruction of the young and new converts.