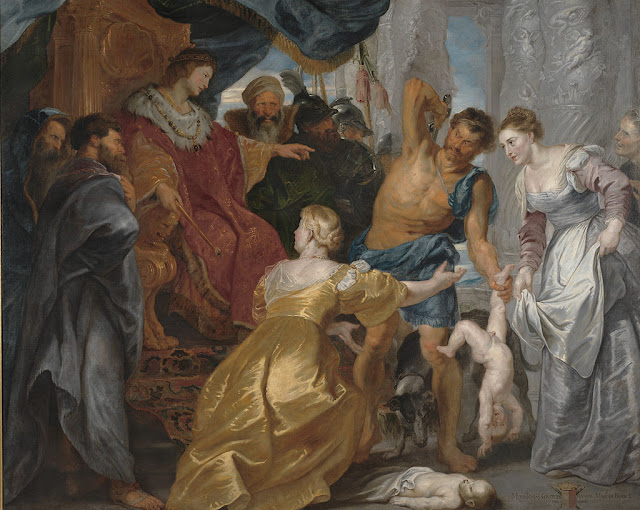 By Devorah Goldman - Posted at The Public Discourse:

Like King Solomon, the courts in England were presented with a straightforward question: To whom does this child belong? In both cases, the true parent was unquestionably the one willing to sacrifice for the child, to safeguard his life even at the expense of never seeing him again, while the 'false mother' did not care whether the child lived or died.


On April 28, 2018, twenty-three-month-old Alfie Evans died while being held at Alder Hey Children’s Hospital, five days after his ventilator had been removed. Alfie had first been admitted to the hospital in December 2016, where he had received treatment for an undiagnosed neurodegenerative disorder until medical staff determined it was in his “best interests” to withdraw medical care, and, for a time, even basic nutrition and hydration.

The furor following this decision has been well documented. The world watched in dismay as Alfie’s parents fought the British court and health systems that they believed had wrongly condemned their son to death.

Protests by “Alfie’s Army” were organized in cities across the globe, air ambulances from Germany and Italy were dispatched to take Alfie to hospitals outside of the United Kingdom, and Pope Francis personally urged Alder Hey to allow Alfie to seek treatment elsewhere. Italy went so far as to as to grant citizenship to Alfie in the hope that it would allow for “an immediate transfer.” Alfie had reportedly been able to breathe on his own for far longer than the hospital predicted, leading to heartbreaking accounts of his father attempting to provide him with mouth-to-mouth resuscitation. The horror over Alfie’s story was compounded by the similar recent case of Charlie Gard, an infant with a neurodegenerative disorder who died after being taken off life support and forcibly held at a different U.K. hospital in direct opposition to his parent’s wishes. Charlie’s parents’ requests to take him to the United States for further treatment were repeatedly denied. In both cases, the parents were not permitted to even take their children home.