So What Did We Learn from Betsy DeVos’ Hearing? 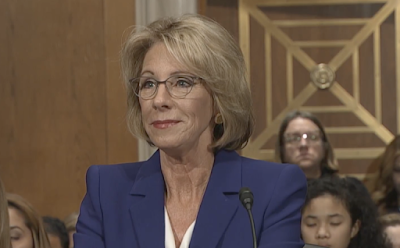 
I’m also not opposed to school choice, but I think we need to be very cautious about how it is implemented and I think what can constitutionally be done at the federal level is extremely limited. Kaine asked DeVos if she believed there should be “equal accountability” given to private schools receiving taxpayer funds.

She wouldn’t agree. I’m thinking, “can you define that please?”


Betsy DeVos, President-elect Donald Trump’s pick for Secretary of Education, had her confirmation hearing before the Senate HELP Committee on Tuesday evening.

So what did we learn?

Not a whole heck of a lot.

Here’s a video of the entire preceding if you feel so inclined. Personally I wouldn’t recommend it.

For over three hours we heard Democrats whine about not getting a second round of questions. That was probably the most heated aspect of the entire hearing. I agree with U.S. Senator Lamar Alexander (R-TN) that DeVos should not be treated differently than President Barack Obama’s nominees. Former Education Secretary Arne Duncan, Obama’s first Secretary of Education, had a fairly short hearing, but since there was a Democrat majority in the Senate that wasn’t unusual.