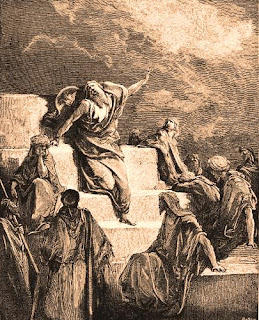 14 “To the angel of the church in Laodicea write:
The Amen, the faithful and true Witness, the Beginning of the creation of God, says this:
15 ‘ I know your deeds, that you are neither cold nor hot; I wish that you were cold or hot. 16 So because you are lukewarm, and neither hot nor cold, I will spit you out of My mouth. (Revelation 3:14-16 NASB)

All Christians should study the Old Testament book of Jeremiah. Why? Jeremiah was a prophet of God. What he was called to do was be the prophet to warn of God’s coming judgment to apostate Judah. They were still very religious. They still offered their sacrifices and held their festivals, but they also mixed in worship of other “gods” that called for the sacrifice of their own children. Jeremiah was threatened. He was beaten by the priests and told to shut up. He was put into stocks. When the Babylonians did come and fulfill the judgment he had prophesied, he was still despised by the apostates. The point is that God would not allow him to quit. He had to continue to preach. He had to continue to tell the truth. Even if only a few listened, he had to remain faithful. The religion that he preached against was the religion the people wanted. It was man-centered. Now keep that in mind as we look at the four Greek words that are key to understanding Revelation 3:14-22.