By Shawn Mathis - Posted at BarbWire.com: 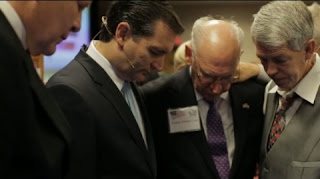 “The power of the American people when we rise up and stand for liberty knows no bounds.”—Senator Cruz


(About two years ago)

I was unsure what the recent Restoring Christian Values Brunch would present to its audience. With a gym full of 100 people, patriotic pictures, life-size cutouts of the Founders, and a life-size liberty bell, I was suspicious.

During the brunch, I quietly sat at my table, eating and listening to the interesting conversation between a man representing a parachurch outreach for European Muslims and a Messianic Charismatic Jewish pastor (who sat next to his co-pastor wife).

Shortly thereafter, pastor Rafael Cruz, father of Senator Cruz, began his talk, entitled, Why Pastors Need to be Involved in the Political Arena. It lasted about an hour.

He quickly proceeded to summarize his concerns with pastors remaining silent on social issues. From the creation of the 501c3 status in the 50s, he traced several social and legal landmarks of decay (from abortion to homosexual marriages) and lamented the silent church each time. 501c3 had silenced the pastors.

To the praise of clapping hands, he noted in passing that he likened Glenn Beck to John the Baptist, as one “crying in the wilderness.” He then challenged the pastors who will not preach on social issues. They claim their call is to “preach the Gospel” but the Gospel is the “whole counsel of God” (Acts 20:26). They are “hiding behind their pulpits.”