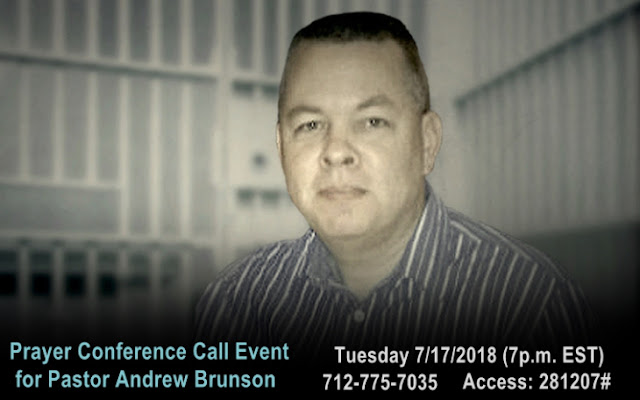 (Voice of the Persecuted) Andrew Brunson is an American citizen who lived in Turkey for over 20 years. He led a small church in Izmir and, along with his wife, had raised their three children there. The couple then decided to apply for permanent residency in this nation of people whom they greatly loved. On Oct. 7, they were called to a local police station with no worries beliving they were finally approved for residency. However, the Brunson’s were detained and his wife released shortly after. Andrew’s arrest followed the failed coup against President Recep Tayyip Erdogan in 2016. The Turkish government is using evidence based on the testimony of a “secret witness’ against Andrew who maintains his innocence. Now Andrew is facing the third hearing of his trial, next week. Some are calling the case a sham trial to force the U.S. to hand over Fethullah Gülen, believed to be the mastermind of the July 2016 failed coup by President Erdogan’s government. In March of this year, his daughter spoke on behalf of her father in front of the U.N. Human Rights Council.

Many are warning of the recent changes taking place in Turkey. It has one of the lowest rankings in the world in terms of freedom of press. The regime continues to abuse the rights of its citizens, including freedom of speech, of association, and the rights of ethnic and religious minorities. Those not belonging to Sunni Islam are under suspicion and Christians in Turkey, a small minority, have been under increasing pressure and victims of intolerance.

At the last hearing, Andrew repeatedly denied charges that he was involved with terrorism and espionage. Brunson said in his defense,

“I am helping Syrian refugees, they say that I am aiding the PKK. I am setting up a church, they say I got help from Gülen’s network.”

There is not one photograph or tape recording praising the PKK at the (Izmir) Resurrection Church. Our church had several Turkish followers. Our doors were open to everyone. I strived to prevent politics entering the church.”

“My service that I have spent my life on, has now turned upside down. I was never ashamed to be a server of Jesus, but these claims are shameful and disgusting.”

In an effort to be united in prayer before and when Andrew enters the courtroom, Voice of the Persecuted and Persecution Watch is inviting Christians to join together on an 8 hour open prayer conference call that will begin at 7 p.m. EST on Tuesday, July 17th and continue to 3 a.m. EST on the 18th.