The Preacher and Politician Meets His Savior

By Rev. David T. Myers - Posted at This Day in Presbyterian History: 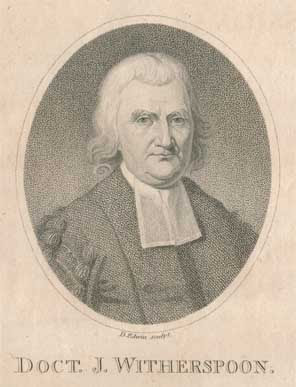 These days, we don’t meet many preachers or politicians who have accomplished as much in the realms of both church and state as the Rev. John Witherspoon did in his seventy-one years of life—and those accomplishments spanned two nations, as well! He had a well-deserved reputation as one who was faithful to his Savior, to the saints of God, and to the average citizens of this great republic. He would go to be with his Lord and King on November 15, 1794.

Born in Scotland and raised to an effective ministry for the kingdom of God there in that “mother country,” Witherspoon answered the call to come to the American colonies. John and Elizabeth Witherspoon, along with their five children, traveled here by ship in 1768. Taking the presidency of the College of New Jersey (later Princeton University), he brought stability to that educational facility in their instruction, library, and financial matters. In the twenty-six years in which he was president, preaching in the nearby Princeton Presbyterian Church known as Nassau Presbyterian, which he founded, and teaching six courses of college level instruction, he taught a president of the United States (James Madison), a Vice-president, nine cabinet members, twenty-one senators, thirty-nine congressmen, three justices of the Supreme Court of the United States, twelve state governors, five members of the Constitutional Convention in 1787, and fifty-two delegates out of one hundred and eighty-eight teaching and ruling elders of the first General Assembly in 1789 of the Presbyterian Church in America. Talk about a vital presence in both the church and the state!