Doug Wilson in his own words

- September 18, 2015
By Rachel Miller - Posted at A Daughter of the Reformation: 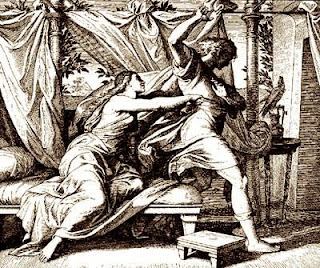 There has been much discussion recently about Doug Wilson’s participation in the Steve Sitler’s wedding. Sitler is a convicted pedophile with a long history of sexual attraction to and abuse of very young children. In June 2011, Doug Wilson presided over the wedding of Steve and Katie Sitler. At one point during the wedding, a man prayed that the couple would be blessed with “the gift and heritage of children.”

Before they could get married, Sitler needed approval from a judge. At that status hearing, the concern was raised about the potential for children:

The discussion amongst Latah County Prosecutor , Bill Thompson; Judge Stegner; and Mr. Wallenwaber, focused, in part, on the legal consequence if/when Steven Sitler and Katie Travis have children. It may be the case that Mr. Sitler will not be allowed to share a home with his wife and child or children. This remedy may be utilized in Idaho when the father is a convicted pedophile. Judge Stegner ruled that the wedding could go forward and issues regarding the protection of children will be addressed if and children are a factor in the marriage.


Earlier this year, Sitler had his first child, and there are significant concerns being raised about his interactions with his son. The question being asked in many places is should a pedophile be encouraged to marry and have children. Given the nature of the sexual perversion and the risk to any children he might father, was it wise to marry Sitler and for someone to pray that he might be blessed with children?

I recently read Doug Wilson’s book, Fidelity, and I think it’s worthwhile to consider what Wilson writes in his book about lust and fleeing temptation.