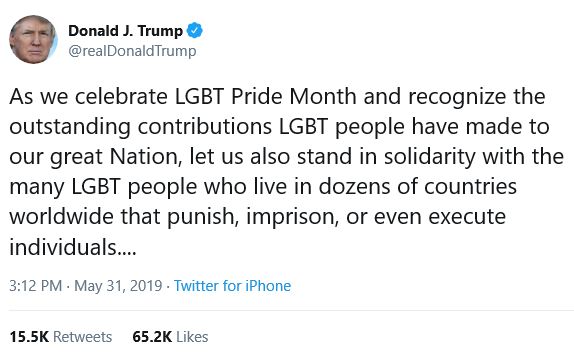 WASHINGTON — President Trump posted two tweets on Friday in recognition of homosexual and transgender “Pride Month,” asking Americans to “stand in solidarity” with homosexuals who live in countries where such sexual practices are illegal, as well as for nations to join his administration’s campaign to decriminalize homosexuality worldwide.

“As we celebrate LGBT Pride Month and recognize the outstanding contributions LGBT people have made to our great nation, let us also stand in solidarity with the many LGBT people who live in dozens of countries worldwide that punish, imprison, or even execute individuals on the basis of their sexual orientation,” he wrote.

“My administration has launched a global campaign to decriminalize homosexuality and invite all nations to join us in this effort!” Trump urged.