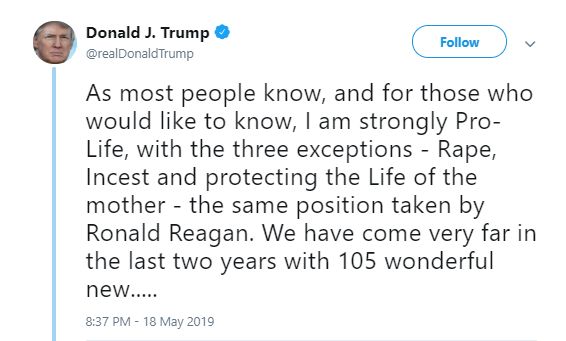 WASHINGTON — Amid a number of states considering bills this legislative season surrounding concerns over the ongoing murder of unborn children, President Trump posted a series of tweets on Saturday evening in which he reiterated that he identifies as pro-life, but believes in the exceptions of rape, incest and the life of the mother.

“As most people know, and for those who would like to know, I am strongly pro-life, with the three exceptions — rape, incest and protecting the life of the mother — the same position taken by Ronald Reagan,” he tweeted.

Trump then touted his achievements in his tenure and urged Americans to stick with him for the next election.