Adam Ford: 'I sold the Babylon Bee and am no longer running it' 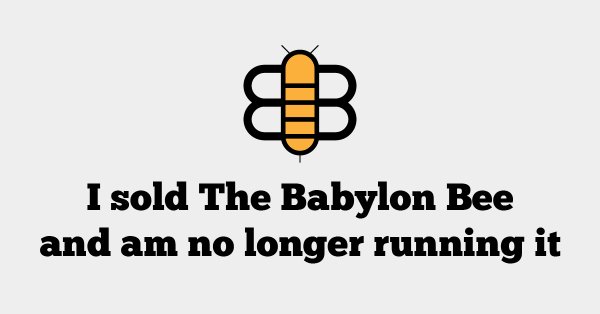 By Adam Ford - Posted at Adam4d.com:

I fully realize that a major reason the Bee (and my webcomic, for that matter) was able to blow up like it did was because of social media — Facebook in particular. This is just how it goes when you make things for the internet: you create, you post to social media, you hope people like it and it spreads. But the power that Facebook held over me as a content creator began to make me very uneasy.


I sold The Babylon Bee about a month ago. I’m no longer running it, but it’s still in good hands. I thought I’d let you all know what, who, and why.

A Christian entrepreneur named Seth Dillon is the new majority owner. My friend Kyle Mann, who has been with the Bee since nearly the very beginning and was head writer since September 2016, has now taken my place as full-time editor and publisher. I am still involved in a more limited capacity and will be for the foreseeable future. I also still own a small piece of the Bee, but I am no longer calling the shots. Also, our first book, How to Be a Perfect Christian, stayed with me; it was not part of the sale.

Why would I sell The Babylon Bee? There are a number of reasons why I came to the conclusion that it was the best option for me. I won’t get into all of them, but I’ll share a few.