The Return of Islam’s Child-Soldiers 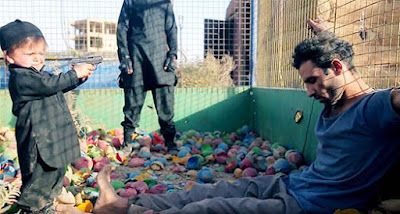 By Raymond Ibrahim - Posted at Voice of the Persecuted:

Past and present, Muslim militants continue relying on the same inhumane tactics to terrorize “infidels.” The devastating effects of one of these occurred last August in Turkey: a child “recruited” by the Islamic State blew himself up in a suicide attack that left at least 51 people—mostly fellow children—dead.

This child was one of countless, nameless, faceless children seized, beat, and indoctrinated in Islam, until they become willing “martyrs” and executioners. Known as the “cubs of the caliphate,” they are graduates from “schools [established by ISIS] to prepare hundreds of children and teenagers to conduct suicide attacks.” The Islamic State is fond of showcasing these abducted children turned criminals.

A few days ago, it posted a video of these “cubs,” most who appear to be about 10 years of age, walking around an abandoned amusement park, where they savagely execute hostages tied to rides. One child, reportedly only four years old, shoots five rounds into a tied up victim while screaming “Allahu Akbar!” (see image above). Another little boy slits the throat of his victim next to a kiddie train before planting the knife in his back. Last November ISIS posted another video of four children—one Russian, one Uzbek, and two Iraqis—executing civilians.

One Christian clergyman explained the Islamic State’s strategy: “They dislocate the families, they take the newborn babies, and they put them in Islamist families,” where they are indoctrinated in jihad, or what is called in the West, “terrorist activities.”