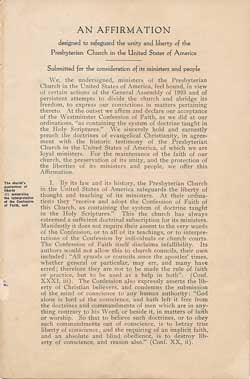 The Root of the Presbyterian Apostasy?

When church historians evaluate the history of American Presbyterianism, the publication of the “Auburn Affirmation” will stand out in importance like the nailing of Luther’s ninety-five theses on the Wittenberg Germany church door in 1517. Except this Affirmation, unlike that of the German reformer, constituted a major offensive against biblical Christianity.

The General Assembly of the Presbyterian Church in 1923 had repeated the earlier high court’s affirmations of five essential truths which made up the fundamentals of Christianity. They were the inerrant Scripture, the Virgin Birth, the substitutionary atonement of Christ, His literal bodily resurrection from the dead on the third day, and supernatural miracles. However the very next year, on January 9, 1924, one hundred and fifty Presbyterian elders issued an affirmation in Auburn, New York which stated that these five fundamentals were not necessary and essential doctrines for the church. Eventually the number of ministers to sign it would increase to 1,294 ordained ministers, about ten per cent of the clergy on the rolls of the Presbyterian church.