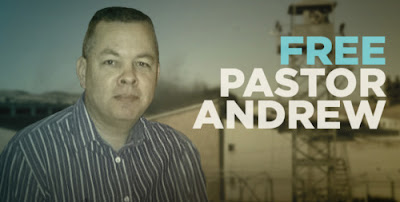 An American pastor, Andrew Brunson, has been falsely charged with “membership in an armed terrorist organization.” Turkey has imprisoned this American pastor without any evidence. He has been a Christian pastor in Turkey for the past 23 years.

We are representing the family of this American Pastor who is facing grave danger in a Turkish prison where he is being held simply because of his Christian beliefs. The government of Turkey – led by an Islamic party – has begun increased crackdowns on Christians, and Pastor Andrew, if convicted, may face years in prison based on extremely serious – and false – charges. We are launching a global campaign to call attention to his plight demanding that Turkey – a NATO member – release Pastor Andrew without delay.

Pastor Andrew Brunson – a U.S. citizen from Black Mountain, North Carolina – was summoned to the local police station in Izmir, Turkey on the morning of October 7, 2016. He believed he would be receiving a long awaited permanent residence card. Pastor Brunson, who is a U.S. citizen, has been living in Turkey for 23 years, running a Christian church with the full knowledge of local authorities.

Upon arriving at the station, he was informed he was being deported based on being a “threat to national security,” a common excuse for deportation in Turkey. It became clear that he was being arrested and would be detained until deportation. He was fingerprinted, searched, and had his phone, pen, etc. taken away. He was denied a Bible. But instead of being deported, he was held with no charges for 63 days, during which time he was denied access to his Turkish attorney. He was placed in solitary confinement for part of this time, with his glasses and watch confiscated.

Then on December 8th, after being detained for 63 days, things took a dire turn. In the middle of the night, Pastor Andrew was taken to a counter terrorism center in Izmir and then on to court. He was questioned and has been falsely charged with “membership in an armed terrorist organization.” The charging documents state no “evidence has been gathered” against him. A Turkish judge had the option to deport Pastor Andrew, release him on weekly sign-ins at the local police station, or imprison him. The judge chose to remand Pastor Andrew to prison.