Persecution in the Pew 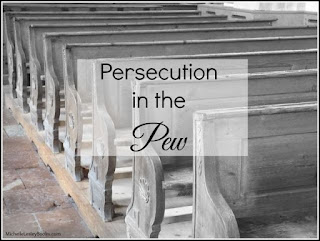 Beheadings of Christians by ISIS. Crosses forcibly torn off churches by the Chinese government. Pastors imprisoned. Believers tortured for leaving Islam or sharing the gospel.

The treatment our brothers and sisters across the globe receive at the hands of pagans is nearly unfathomable. They are made to suffer – simply for claiming the name of Christ – by those who openly hate God and want nothing more than to stamp out Christianity.

This is how we, as the American church, have come to define persecution. Outsiders, non-Christians, and the government, all on the attack against the Bible, our faith, our practices, and other beliefs we have long held dear. It’s a correct definition, but it’s not a complete definition.

While we already see a “light” form of this type of persecution in the U.S. – mainly over the issue of homosexuality – there’s another kind of Christian persecution that is mushrooming right under our noses, which most church members either seem oblivious to, or are actually participating in. It’s the persecution in the pew.

If you’re a Christian who has ever dared to vocally take a stand on the truth of God’s word against the false teaching so prevalent in today’s pop Christianity, you’ve almost certainly experienced this type of persecution at the hands of people who call themselves “Christians.”