CULT OF PERSONALITY: THE DARKNESS UNDER THE EVANGELICAL LIMELIGHT

By Pamela Couvrette - Posted at Guarding the Deposit: 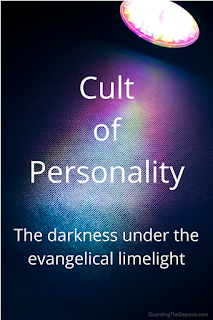 I sell the things you need to be
I’m the smiling face on your TV
I’m the cult of personality
I exploit you, still you love me
I tell you one and one makes three

These lyrics from the 1984 song “Cult of Personality” (by the band Living Color) aptly describe the many preachers and teachers found in Christian media, megachurches, bookstores, and at conferences. Wikipedia states: “A cult of personality arises when an individual uses mass media, propaganda, or other methods to create an idealized, heroic, and at times, worshipful image, often through unquestioning flattery and praise.” These prominent ‘Christian’ leaders deliver these false gospels and teachings, which flatter the ego and praise the flesh. They exploit the sheep, lie, (2 Peter 2:1-3) and tickle the carnal Christian’s ears with what the Christian desires to hear (2 Timothy 4:3), while they themselves are revered and put up with easily enough (2 Corinthians 11:4).

When we think of a cult, usually Jehovah’s Witnesses, the religion of Scientology, or someone like David Koresh comes to mind, as we’ve become accustomed to determining which group is a cult, based on society’s definition. However, cults and their leaders can be determined from a theological basis as well. While we can examine prominent leaders in the visible church from the societal viewpoint (which include devotion toward a particular figure, having beliefs regarded by others as strange or sinister or having a misplaced admiration for a particular person), I’ll use a theological viewpoint to show how some evangelicals in the limelight exhibit the traits of cult leaders. I’ll show how they teach so-called truths that deviate from the Christian faith.

IT’S ALL DEMONIC FUN AND GAMES UNTIL SOMEONE PUTS GOD IN A BOX
Labels: Apostates Biblical Discernment Evangelicalism False Teachers