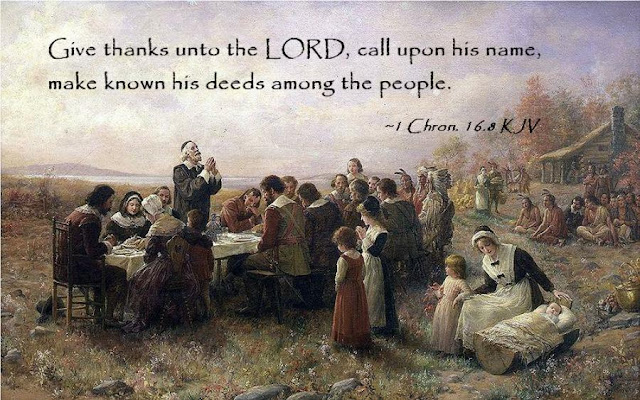 By Angela Wittman
Taken from a compilation of Thanksgiving information posted at A Puritan's Mind:

“The Holy God having by a long and Continual Series of his Afflictive dispensations in and by the present War with the Heathen Natives of this land, written and brought to pass bitter things against his own Covenant people in this wilderness, yet so that we evidently discern that in the midst of his judgments he hath remembered mercy, having remembered his Footstool in the day of his sore displeasure against us for our sins, with many singular Intimations of his Fatherly Compassion, and regard; reserving many of our Towns from Desolation Threatened, and attempted by the Enemy, and giving us especially of late with many of our Confederates many signal Advantages against them, without such Disadvantage to ourselves as formerly we have been sensible of, if it be the Lord’s mercy that we are not consumed, It certainly bespeaks our positive Thankfulness, when our Enemies are in any measure disappointed or destroyed; and fearing the Lord should take notice under so many Intimations of his returning mercy, we should be found an Insensible people, as not standing before Him with thanksgiving, as well as lading him with our Complaints in the time of pressing Afflictions.”

On June 20, 1676, the governing council of Charlestown, Massachusetts, held a meeting to determine how best to express thanks for the good fortune that had seen their community securely established. By unanimous vote they instructed Edward Rawson, the clerk, to proclaim June 29 as a day of thanksgiving, our first.

The celebration we now popularly regard as the “First Thanksgiving” was the Pilgrims’ three-day feast celebrated in early November of 1621 (although a day of thanks in America was observed in Virginia at Cape Henry in 1607). The first Thanksgiving to God in the Calvinist tradition in Plymouth Colony was actually celebrated during the summer of 1623, when the colonists declared a Thanksgiving holiday after their crops were saved by much-needed rainfall.

The Pilgrims left Plymouth, England, on September 6, 1620, sailing for a new world that offered the promise of both civil and religious liberty. The Pilgrims had earlier left England in 1608, as the Church of England had curtailed their freedom to worship according to their individual consciences.

The Pilgrims had settled in Holland for twelve years, where they found spiritual liberty in the midst of a disjointed economy (which failed to provide adequate compensation for their labors) and a dissolute, degraded, corrupt culture (which tempted their children to stray from faith). For almost three months, 102 seafarers braved harsh elements to arrive off the coast of what is now Massachusetts, in late November of 1620. On December 11, prior to disembarking at Plymouth Rock, they signed the “Mayflower Compact,” America’s original document of civil government and the first to introduce self-government. While still anchored at Provincetown harbor, their Pastor John Robinson counseled, “You are become a body politic … and are to have only them for your… governors which yourselves shall make choice of.”

The Pilgrims were Separatists, America’s Calvinist Protestants, who rejected the institutional Church of England. They believed that the worship of God must originate in the inner man, and that corporate forms of worship prescribed by man interfered with the establishment of a true relationship with God. The Separatists used the term “church” to refer to the people, the Body of Christ, not to a building or institution. As their Pastor John Robinson said, “[When two or three are] gathered in the name of Christ by a covenant made to walk in all the way of God known unto them as a church .”

Upon landing in America, the Pilgrims conducted a prayer service, then quickly turned to building shelters. Starvation and sickness during the ensuing New England winter killed almost half their population, but through prayer and hard work, with the assistance of their Indian friends, the Pilgrims reaped a rich harvest in the summer of 1621. Most of what we know about the Pilgrim Thanksgiving of 1621 comes from original accounts of the young colony’s leaders, Governor William Bradford and Master Edward Winslow, in their own hand.

“They begane now to gather in ye small harvest they had, and to fitte up their houses and dwellings against winter, being well recovered in health & strenght, and had all things in good plenty; for some were thus imployed in affairs abroad, others were excersised in fishing, aboute codd, & bass, & other fish, of which yey tooke good store, of which every family had their portion. All ye somer ther was no wante. And now begane to come in store of foule, as winter aproached, of which this place did abound when they came first (but afterward decreased by degree). And besids water foule, ther was great store of wild Turkies, of which they took many, besids venison, & c. Besids they had aboute a peck a meale a weeke to a person, or now since harvest, Indean corne to yt proportion. Which made many afterwards write so largly of their plenty hear to their freinds in England, which were not fained, but true reports.” W.B. (William Bradford)

“Our Corne did proue well, & God be praysed, we had a good increase of Indian Corne, and our Barly indifferent good, but our Pease not worth the gathering, for we feared they were too late sowne, they came vp very well, and blossomed, but the Sunne parched them in the blossome; our harvest being gotten in, our Governour sent foure men on fowling, that so we might after a more speciall manner reioyce together, after we had gathered the fruit of our labors; they foure in one day killed as much fowle, as with a little helpe beside, served the Company almost a weeke, at which time amongst other Recreations, we exercised our Armes, many of the Indians coming amongst vs, and among the rest their greatest King Massasoyt, with some nintie men, whom for three dayes we entertained and feasted, and they went out and killed fiue Deere, which they brought to the Plantation and bestowed upon our Governour, and upon the Captaine, and others. And although it be not alwayes so plentifull, as it was at this time with vs, yet by the goodneses of God, we are so farre from want, that we often wish you partakers of our plenty.” E.W. (Edward Winslow) Plymouth, in New England, this 11th of December, 1621.


The feast included foods suitable for a head table of honored guests, such as the chief men of the colony and Native leaders Massasoit (“Great Leader” also known as Ousamequin “Yellow Feather”), the sachem (chief) of Pokanoket (Pokanoket is the area at the head of Narragansett Bay). Venison, wild fowl, turkeys and Indian corn were the staples of the meal, which likely also included other food items known to have been aboard the Mayflower or available in Plymouth, such as spices, Dutch cheese, wild grapes, lobster, cod, native melons, pumpkin (pompion) and rabbit.

By the mid-17th century, the custom of autumnal Thanksgivings was established throughout New England. Observance of Thanksgiving Festivals began to spread southward during the American Revolution, as the newly established Congress officially recognized the need to celebrate this holy day.