Reformation Day and the Righteousness of God

By Mike Riccardi - Posted at The Cripplegate: 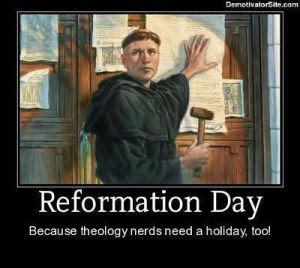 So, I know I’ve posted this (and even re-posted this) before, but when Reformation Day comes around, these truths are what my heart and mind settle upon as I thank the Lord for what He accomplished through the Reformation.

499 years ago this upcoming Monday, on October 31, 1517, Martin Luther famously nailed his 95 Theses to the Castle Church door in Wittenberg, Germany, kick-starting the Protestant Reformation. Nearly 500 years later, God’s people reserve this day to celebrate the rescue of His Word from the shackles of Roman Catholic tyranny, corruption, and heresy. The glorious Gospel of Jesus Christ as revealed in the sufficient Scriptures had been recovered, and it’s been doing its saving work ever since.

Romans 1:16–17 stands at the heart of the Reformation, especially because of how central it was in Luther’s conversion. Luther speaks of how he had hated the phrase, “the righteousness of God,” because he understood it to be speaking only of God’s standard of righteousness by which He would judge unrighteous sinners. But eventually, he says, “I began to understand that the righteousness of God is that through which the righteous live by a gift of God, namely by faith. Here I felt as if I were entirely born again and had entered paradise itself through the gates that had been flung open.”