Of Rome And Popes And Humility 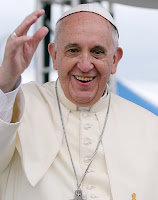 Pope Francis has landed and, if the media circus is an indication, it's a pretty big deal. Historically I can understand the significance of his visit. He's only the fourth Pope to come to the United States—the first being Pope Paul VI in 1965. For the first time in congressional history the Bishop of Rome addressed both houses of Congress. And since over seventy-million people in America are more or less devoted to the Holy See, his voice on social concerns from the unborn, to immigration, and family values isn't completely irrelevant. Despite the pomp and pageantry maybe it's a good day to be reminded why we're Protestant.

One of the things that has captured the attention of the world is Pope Francis's humble approach to the papacy. From the moment he was inaugurated he refused the papal car and rode on the bus with his fellow bishops. Everyone was amazed when he took time to pay his hotel bill. He even chose to forgo the Apostolic Palace as a place of residence and prefers the more modest St. Martha's Guesthouse. Just this week he turned down an invitation to lunch with Washington's elite to serve and dine with the homeless. While this has enamored the media, drawn tribute from President Obama on the White House South Lawn, and won praise from so many people, I personally find it completely contradictory that a man with such a reputation can still call himself “Pope,” or according to his full title, “His Holiness, Bishop of Rome, Vicar of Jesus Christ, Successor of the Prince of the Apostles, Supreme Pontiff of the Universal Church, Primate of Italy, Archbishop and Metropolitan of the Roman Province, Sovereign of the Vatican City State, Servant of the servants of God.”