Abortion Is The New Slavery

By Jayme Metzgar - Posted at The Federalist:

"I would go so far as to say that this is a pivotal moment for Americans grappling with abortion. The Planned Parenthood videos—and the surrounding debate over the use of fetal tissue—have revealed just how closely abortion parallels the last great moral evil enshrined in American law: slavery..." 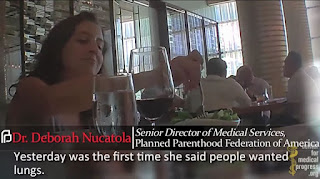 When I first saw the bombshell video of a Planned Parenthood doctor blithely describing over lunch how to crush unborn babies and harvest their organs, my response was visceral: I cried. When the second and third videos were released—the latest one containing footage of technicians picking through limbs and organs—my horror grew. Like most Americans opposed to abortion, I felt a revulsion in the story that seemed to require no explanation.

But it’s become clear that an explanation is, in fact, required. While some on the left have been deflecting the ethical issue by focusing on legal technicalities, a significant number are defending the practice of tissue sale (or donation) itself. “What’s so wrong,” their argument goes, “with using the body of a fetus who was going to be aborted anyway? Isn’t it better to use it for research and cures? Your real problem isn’t with tissue donation at all,” they conclude, “it’s with abortion.”